Tübingen/Reutlingen/Kirchentellinsfurt, October 18, 2022. The Cellforce Group is pressing ahead at full speed with the construction of its new corporate headquarters. Just a few weeks after initial work began, the foundation stone was laid today for the state-of-the-art development and manufacturing facility near Reutlingen-Kirchentellinsfurt. Once completed, the Cellforce Group – a joint venture between Porsche AG and battery specialist CUSTOMCELLS – will be working at this site to develop and manufacture a completely new standard in the field of high-performance battery cells for the global automotive industry and contribute to making mobility sustainable worldwide.

“Proactive, close to home, and technically highly innovative with our own high-performance battery cell development and production in Reutlingen-Kirchentellinsfurt, we are taking the road to e-mobility together with our partners. We are developing a completely new battery standard based on the use of silicon with an even higher energy density and thus range for vehicles, further improved fast-charging capability, and a green footprint,” said Dr. Markus Gräf, Managing Director of Cellforce Group GmbH as the foundation stone was laid in the presence of representatives of industry, state and local authorities, and the partners of the innovative joint venture. “With BASF, we are working on new cathode materials, a sustainable, European supply chain, and the recycling of production waste. And the silicon-based ‘gamechanger material’ used – developed by partner Group14 – will change the battery world,” Gräf predicted.

“Our desire is to strengthen the German development as well as production site and to bring a new technology to the global forefront of cell chemistry development. We have also decided to rely on partnerships and European technology on the production side. With Mühlbauer, Dürr, Coperion, Saueressig, Kampf, PEC, and our neighbor Manz, we are also setting an example here – that we in Europe can do it all ourselves,” Gräf continued. In the intermunicipal industrial park near Reutlingen, the Cellforce Group is creating high-quality jobs and helping to build battery cell development and production into a key industry in Germany – and doing so sustainably.

Dr. Nicole Hoffmeister-Kraut, Minister for Economic Affairs, Labor and Tourism in Baden-Württemberg also attended the laying of the foundation stone. With regard to the importance of the project, she said: “The establishment of competitive battery cell production in Baden-Württemberg is an economic policy task of the first order and a strategic goal of the state government. With today’s laying of the foundation stone for the Cellforce Group’s new headquarters in the Reutlingen-Kirchentellinsfurt industrial park, we are taking another important step towards establishing Baden-Württemberg as a leading battery location and making it fit for the future,” she said. For this reason, she said, the state government is also participating financially in the IPCEI battery cell production funding measure of the German Federal Ministry of Economics. “Cellforce is receiving funding of around 17 million euros from the state in this context. This is a strong and encouraging sign for Baden-Württemberg as a business location in uncertain times,” Hoffmeister-Kraut explained.

The site will help to save on logistics and transport routes. The construction itself will set new standards in the battery industry, also in terms of sustainability. In addition to the necessary administrative facilities, the site will include facilities for researching and developing cell chemistry as well as production facilities for manufacturing battery cells. In addition, the Cellforce Group is building a state-of-the-art powerhouse to intelligently network the various energy flows in production. For example, by using a high-temperature heat pump, waste heat flows at a low temperature level can be raised to higher temperature levels and fed to other processes requiring heat. The integration of in-house photovoltaics also contributes to the goal of achieving a very low CO2 footprint for battery cell production.

Batteries as the key to the success of the mobility revolution

“The battery cell is the combustion chamber of the future. As a manufacturer of luxury electric vehicles and high-performance sports cars, we want to be among the leaders in the global competition for the best-performing battery cell. That is why we are investing in these technologies of the future,” says Lutz Meschke, Deputy Chairman of the Executive Board and Member of the Executive Board for Finance and IT at Porsche AG.

“We all know that the key to the success of electromobility and thus the mobility revolution lies in the batteries,” says Dr. Dirk Abendroth, CEO of the CUSTOMCELLS Group, one of the leading developers and manufacturers of special battery cells. “We are honored that Porsche has relied on us here as a provider of ideas and as a partner – because it also shows us that our approach, our expertise and our business model work.”

The Cellforce Group has used the past few months to inform its new neighborhood as well as the public in detail about the company’s plans on site. At the laying of the foundation stone, the Managing Director of the Cellforce Group, Markus Gräf, also thanked the representatives of the federal, state, and local authorities for their close and trusting cooperation.

The joint venture acquired the 28,151-square-meter site in the Reutlingen/Kirchentellinsfurt industrial park last year. The Cellforce Group will initially develop and produce high-performance lithium-ion pouch cells for special automotive applications there. The production plant is to enter operation with an initial capacity of at least 100 MWh per year and then ramp up to a capacity of at least 1 GWh. This is equivalent to high-performance battery cells for around 10,000 vehicles. The Federal Republic of Germany and the state of Baden-Württemberg are helping fund the project with approximately 60 million euros.

Cellforce Group GmbH (CFG) will develop and produce high-performance lithium-ion pouch cells for special automotive applications from 2024. Cellforce is a joint venture in which Porsche AG holds a 72.7 percent stake, with the remaining shares held by CUSTOMCELLS Holding GmbH. The managing directors are Markus Gräf as Chief Operating Officer (COO) and Wolfgang Hüsken as Chief Financial Officer (CFO). The workforce is expected to grow to up to 100 people by 2025. 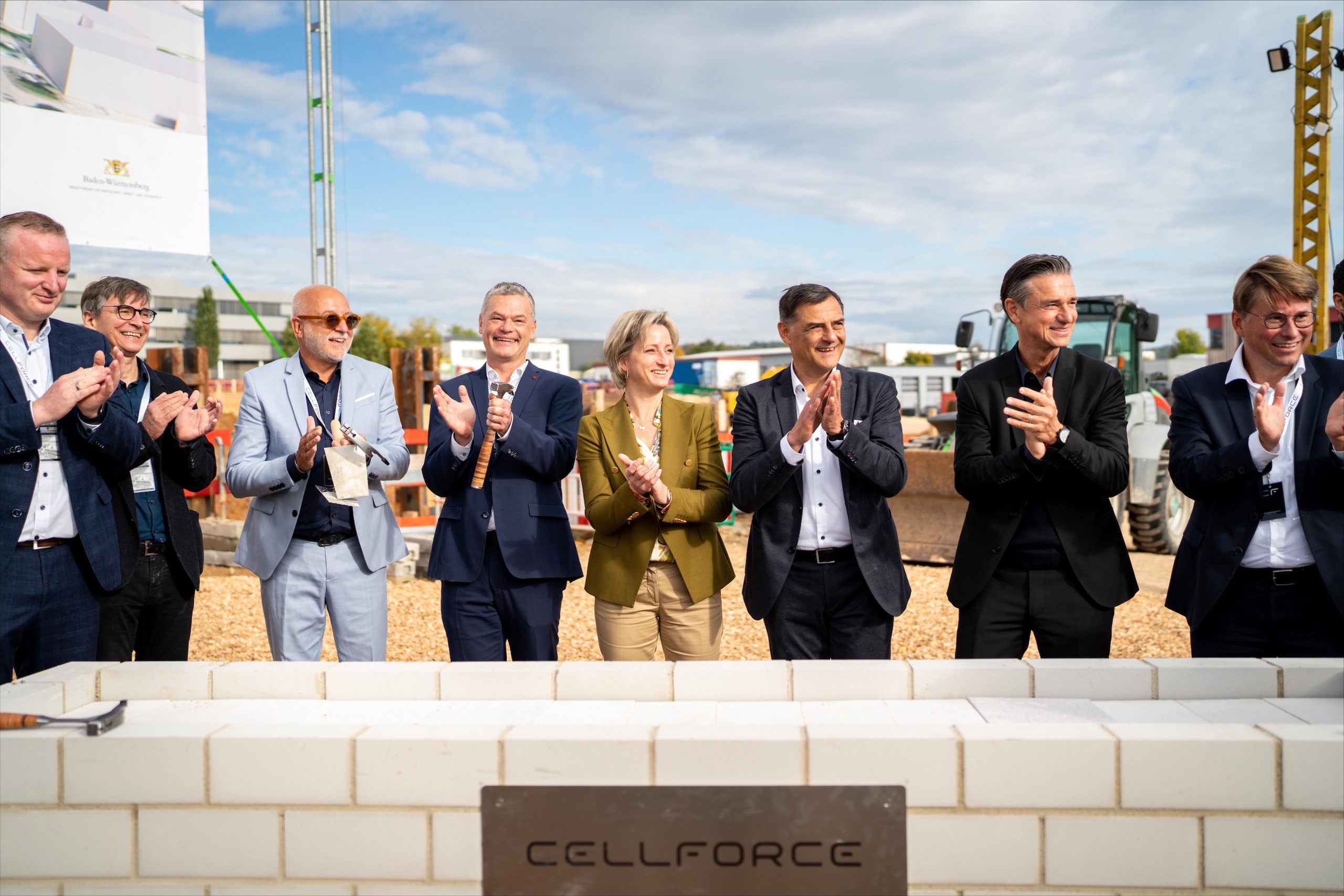